Get "Ben 10 alien force vengea" at your mobile phone. 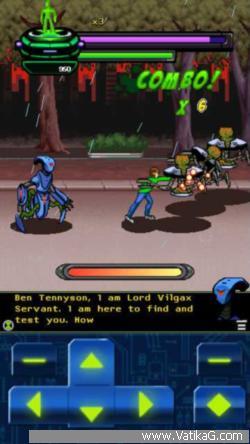 Description : Ben 10 alien force vengeance of vilgax is a cool java game for symbian s60 5th edition based touch screen mobile phones. vilgax has returned. he challenged ultimos, the greatest hero of planet teekay, and in defeating him absorbed all of his power. the great conqueror of ten worlds is now more fearsome than ever and he s looking for the hero of the earth. be ready ben, he is coming for you.vilgax resurfaces with a new army. under the galactic code of conduct, he challenges the greatest champion of each world he visits to single combat, the prize being that champion s planet. each time he defeats a champion, he absorbs their powers, the tenth and latest being ultimo of the galactic enforcers. with the strength of ten heroes at his disposal, vilgax heads to earth and challenges ben, giving him 24 hours to prepare.the graphics of this game are superb. this game is published and developed by globalfun. ben 10: alien force "vengeance of vilgax" is an offerings of cartoon network. i am pretty sure that after playing this game on your mobile, you would love it. you will be surprised to see vilgax back